did the world need those prometheus movies or that covenant thing or whatever? what a load of pretentious, sententious nonsense. utter drivel.

I've never seen blade runner. I plan on watching it after SW. A lil excited to see it.

I've never seen blade runner. I plan on watching it after SW. A lil excited to see it.

Bladerunner 1 & 2 are amazing movies. I will upvote all your thoughts on it.

Resident Evil Apocalypse 7/10, fun movie but this is where the movie series went off the rail and never recovered.

This is all I remember from the RE that came after. I don't want to remember this.

The director's cut is like 3 hours long. The economics of movie theaters probably doesn't work with 3 hour movies on niche subjects.

That's BS imo. Plenty of films being published with runtimes over 3 hrs. Pretty much every film by tarantino or nolan for example. Scott is a bigger name than both of them, there was no reason to butcher that movie like they did.

Nolan and Tarantino are an order magnitude more famous than Scott. Nolan's Batman movies set records and Q.T. one offs make more money than Alien sequels made in this millennia. Both of those guys are arguably more creative directors too.

Eh? Tarantino and Nolan are both creative people certainly, but they're also very much identifiable by brand. You know exactly what the movie will be like going in. Especially with Tarantino, though Nolan's recurrent theme of 'time manipulation' has returned so often it's tiresome.

Ridley Scott from Alien to Blade Runner, Thelma & Louise, to Gladiator - his diversity and creativity obviously far exceeds both, not to mention the lasting cultural impact of many of these films. Blade Runner and Alien are hall of fame type of stuff.

Nolan and Tarantino, while great filmmakers in their own right,  don't hold a candle to Scott's filmography.

did the world need those prometheus movies or that covenant thing or whatever? what a load of pretentious, sententious nonsense. utter drivel.

He's hit or miss and always has been, 1492 was also a terrible film. I saw All the Money in the World a few weeks ago and that was recent & actually very good.

You carried the team FWIW. I had no answer to those siege ongars

Star Wars OT,
This is one series I feel too biased towards to give ratings. I liked 6 the most as a kid because of the space battle. I liked 5 the most last time I watched. I liked 4 the most this time.

5 is the best movie but I love ANH. Not really knowing that it'll become a trilogy, more world building, a bit more mystical than the others, just a fun movie
Cloud City is my favorite locale though.
As for 6, I know I knocked TFA for being constant action but the Ewok scenes before the fight were a bit too slow. I don't hate Ewoks.
Also why the fuck did they add that song in the middle of Jabbas palace, replacing an old shorter one. Weird cuts there.
idk why but the copy I watched today and the last one I got which was a borrowed bluray have weird greenscreen effects. The bluray had very obvious green boxes around spaceships, this one the ATSTs have a very green tint when moving.eh I could still see a triangle around the SSD when it crashed into the Death Star II
And like other movies transferred to bluray idk if they lost some original footage or what some short shots are very clearly worse quality than others.
still the best space fight and space battle music, only ANH and Rogue One are close.

ps the attack on the death star ii was the hardest mission for me in rogue squadron 2. I think I only beat it twice. falcon was hard to maneuver but dang it was the only ship i didnt get shot down in
pps rhinegeist dad holiday ale sucks

Plz teach KEN so he can do a LotR trilogy review

@rthicci: OT was overall better before the digital revamp. It's cool that we got Jabba in 4, but it kind of robbed from the reveal in 6. Also, fart jokes, really?

GEMINII FILMS
4 years ago
I have altered the original trilogy, PRAY that I don't alter it further.

That jabba scene in 4 is so bad

From the behind the scenes, it wasn't originally filmed with a giant slug in mind. Jabba was humanoid, so they had to video edit a way for Han Solo to walk around behind him. A little bit of jank on that scene where he steps on his tail or whatever organ that is. I think deleted scenes being put back in is probably the best (if unnecessary) contribution the edits made outside of the different cities celebrating at the end of 6.

The trolliest edit is definitely Vader's "NOOOO," ribbing fans with the thing I've seen most mocked from episode 3. Man, I hope I still have the original VHSs somewhere around and that they didn't get sent to my aunt to decompress the video library. Probably already gone to a pawn shop if so.

I know. I still dont get why it was included and all the cgi looks so poor compared to other movies

The CGI in the prequels was rather blatant as well. Things were CGI that didn't need to be CGI (even freaking chairs), and it made the characters look as if they were walking around inside of a cartoon. I think it may have been less noticeable in the prequels because that's the norm for the prequels, so you're not mentally comparing the old practicals with a massive CGI touchup.

I think films like Jurassic Park or Terminator 2 are a good example of less is more when it comes to prioritizing practical effects where possible and using CGI to lace it all together. 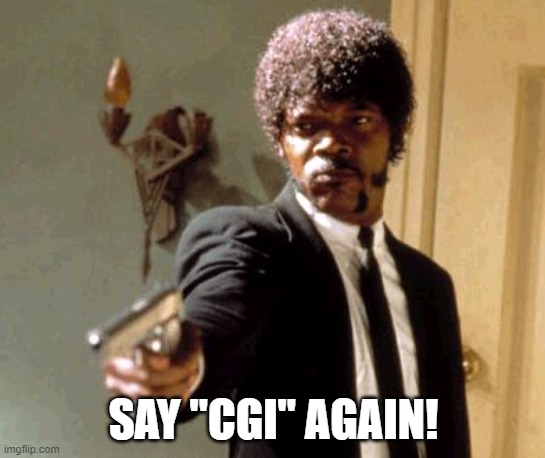 The prequels went all in on cgi and I can accept that. The CGI added to the OT was in a weird place where it's was largely better looking than the prequels but worse than any big budget movie at the time. and of course most of it was unnecessary

So uh what I typed disappeared but I was only 15min in anyway. The Rise of Skywalker.
4/10. While I dont hate it I will remember nothing from this movie in a month.

People weren't wrong when they said its 2 movies crammed into one. Is it Dune?
oh boy. slowmo and flashbacks, 2 things I hate
Even the dialogue goes too fast
Final Order is such a dumb name. First Order. Fallen Order. Final Order. Jedi Order. too many
I guess lightspeed skipping drew the tie fighters in that was a weird scene
god it feels like fanfiction again
"they fly now". kill me
For all of this action I'm kind of bored
did c3po gain weight?
The Knights of Ren are an 80s post apoc movie gang
I get what people mean when they complain about the OT going soap opera-y with the you're actually my family reveals but this is the worst.
The first order really fucking sucks at brainwashing
Why do they have a basecamp in the open on a jungle planet anyway. Why isn't a ship good for that.
The Death Star II stuff was kinda cool.
Why do they keep holding their lightsabers down? It's not unseen before but it looks so awkward
I didn't think you could make a planet blowing up so underwhelming
cavalry charge on a star destroyer? complete and utter schlock. Why do they need to ground assault a big antenna anyway
kinda turned my brain off the last 30minutes

Probably the dumbest part of the sequel trilogy is how utterly inept the replacement government was. Why did they need an interstellar fleet of alien cab drivers to fight nursing home Palpatine? If the Emperor could blast all that with atmospheric lightning or whatever, why was he struggling against Luke? Why was the First Order so gigantic? How did they build such an enormous fleet that dwarves anything seen in OT? Feels "forced." I think the writers needed a new underdog to for audiences to side with.

please newb, it's best not to think too much