Sad to see this place go.  When BF2 was in it's prime, this was the place to be.  Seriously a great community.

Been registered here for 9 years 7 months.  I still have memories of this place.

Wish you the best, Chuy.

I'll leave you guys with this.

WHO ARE YOU PEOPLE!?

Ty I think you'll appreciate this screenshot I took of this forum many many years ago. 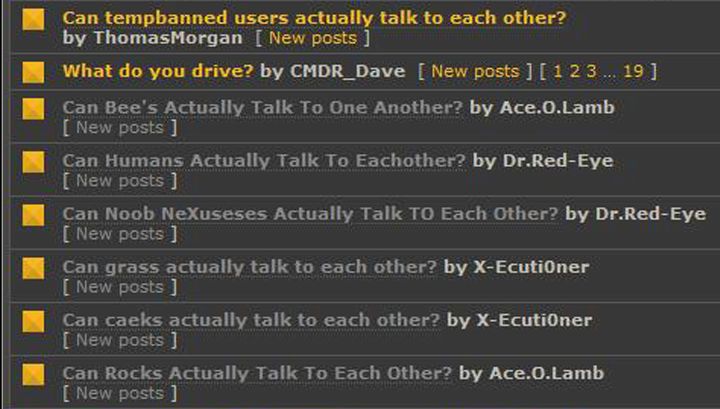 I haven't been on this site in over 6 years.  I just remembered about this site and thought I'd see if it's still here.  And here it is.  I was all over this site in high school, oh man the memories.  Although looking at some of my old posts makes me turn red, they're so stupid!  Took me awhile to remember my password because the email I had registered this account to doesn't exist anymore.

It looks like it's quieted down a bit but back in the day man,  this was the place to be.  BF2 was such a great game and this was the BF2 community to be in.  So many great threads, so many great people.

This just made my day.  I fucking love you guys.

And in place of Xerxes is Obama, including the gold and piercings.

Why are his kids white?

I've never tried Everclear before. Looks like some good shit.

Chugging rubbing alcohol would be more tolerable than that.

Seems to me all they had to do was announce they wanted to hire the little tart to sell sex goods and they got their name in print and all of us talking about it for free.
/win.

That is exactly the message Lifestyle is trying to send youngsters.

Was the beer alright?

I'll test the condoms with her, if need be.

No social utilities for you.

Gtfo of your house and just see people in rl.

They have those at takeways?

and you see a takeway, what do you get?

Free at last! I don't know where I should drive to though.

Make sure you wear your American Eagle clothes to Pakistan

Like they're literate.  I asked a cousin to show me where Pakistan was on a map.

He pointed at Africa.

What does literacy have to do with clothing?

That most certainly is webdings.

The stores are fine, clothes are clothes.  The ones that hate like that probably:

a) are too fat to properly fit the clothes
b) cannot afford the clothes
c) wear wal-mart shoes and polos.

I prefer AE and Aeropostale to AF (AF is overpriced as shit) but Abercrombie makes the better jeans of the three, IMO.  The clothes are priced more than the walmart or Target stuff, but it is of better quality and design.

If clothes are clothes, then what's the point of spending rediculous amounts of money when you can get cheaper non-brand clothing that looks just as fine with no difference in quality?

You can get clothing of equal or better quality at other stores that won't charge you an ungodly amount of money.

Oh, and get forget to add Aeropostal as another store that sells overpriced crappy clothing.

All three of those stores are shit.

Most numb-in-the-head dimwits don't realize the brain is governed by chemicals. To say ADHD isn't real - is akin to saying chemicals in your brain don't exist, O' how utterly moronic. The fact is it is more likely, that given enough time, science will invent a true: happy pill. Or other pills for other chemical imbalances or even a social-enhancer pill, one that deters criminal intent so effectively - only those who can't afford these pills will be: unhappy criminals.

Name me the chemical that makes misbehavior acceptable.

(Not to be confused with ADD, which I think can be a problem.)

ADHD, or Attention Deficit Hyperactivity Disorder, is utterly, and totally, bullshit.  It is nothing more than an excuse for bad behavior.


Yes, it is possible to have difficulty concentrating, and I believe that Attention Deficit Disorder can be a problem.  But once you put the "Hyperactivity" in there, you've got a new, bullshit, overly diagnosed phrase.

I have had many friends who were, well, "normal."  But then they were "diagnosed" with, (or given by the doctor, if you please), "ADHD".  They were never the same afterwords.  They started acting totally different, acting ways they have never acted before.  They were more jittery, seemed more energetic, talked faster, did stupider things, and they were just off the wall.

I was "diagnosed" with "ADHD".  The doctor said, "We're going to put you on (this), (this), and (this) medication."  I felt like saying, fuck you pal, take your "ADHD" and shove it.  I declined those medications because I know for a fact I don't have "ADHD."

Kids "get" "ADHD" when they are told they have it.  If you say nothing, they stay the same.

I feel one of the worst things you can do as a parent is tell your kids that they have "ADHD".  Because once you do, they get an excuse to misbehave.

You are not born with, or develop, "ADHD."  You are given the title of having it.

And to those of you who are thinking, "What does he know, he doesn't know what it's like to have ADHD, he's not the way I am."
You do not have "ADHD."  You might have ADD, but the doctor threw in another word just to make the list of medications he can prescribe you even longer.  And of course, as an added bonus, you get to say, "Sorry, but I have ADHD," like it's an award.


There is no such thing as ADHD.

I have that game on my PC now (emulator) but it just isn't the same without the N64 controller.

Karma for whoever tells me how to connect an N64 controller to my computer.

Wait, found it myself.

Please, karma'ing yourself is just lame.

Until a man, who is born a man, gives birth to a child, I remain unimpressed.

"29 parameters of FUCK YOU"

I think that anything that tastes like dill that is not a pickle is disgusting.  Like dill chips.

When you eat something, post it here along with a description and picture.

Crappy picture, but this cake is delicious.

Spoiler (highlight to read):
When the joker is walking away from the hospital in the nurse outfit, and was like, wtf, why didn't all the explosives go off?  Hilarious.

Now this is the story all about how
My life got flipped, turned upside down
And Id like to take a minute just sit right there
Ill tell you how I became the prince of a town called bel-air

In west philadelfia born and raised
On the playground where I spent most of my days
Chilling out, maxing, relaxing all cool
And all shooting some b-ball outside of the school
When a couple of guys said were up in no good
Started making trouble in my neighbourhood
I got in one little fight and my mom got scared
And said youre moving with your aunte and uncle in bel-air

I whistled for a cab and when it came near the
Licensplate said fresh and had a dice in the mirror
If anything I could say that this cab was rare
But I thought now forget it, yo home to bel-air

I pulled up to a house about seven or eight
And I yelled to the cabby yo, home smell you later
Looked at my kingdom I was finally there
To settle my throne as the prince of bel-air